Sip, Sip, Sigh.
The day unwinds before me, draining from my mind into my glass.
Tension drips away,
I am content.
Posted by Katie at 10:48 PM No comments:

"The rain began again. It fell heavily, easily, with no meaning or intention but the fulfillment of its own nature, which was to fall and fall. "
- Helen Garner 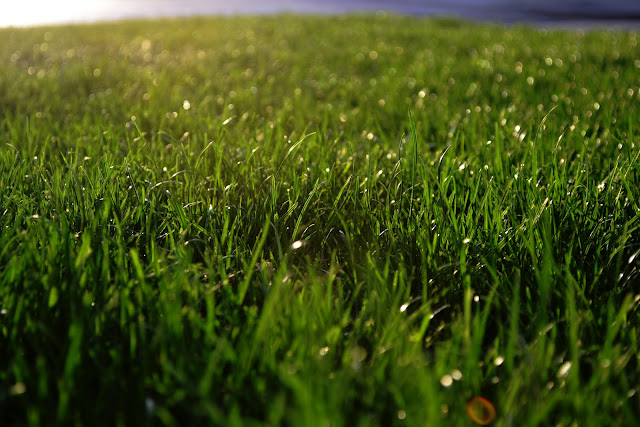 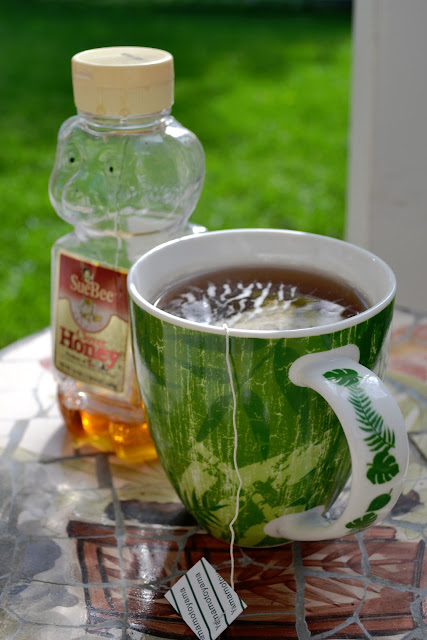 As soon as I typed that, Jason Mraz began running through my head. Being a sucker for fast, rhythmic lyrics and a pretty voice, my love for j-mraz began with that song back in middle school. But anyways, my remedy for the day is going to be this roasted green tea and honey. It tastes kind of like what I would imagine barley to taste like...hence, the honey. Apparently it's really good for when you're sick. I work today so I'm hoping it goes by really fast. :) 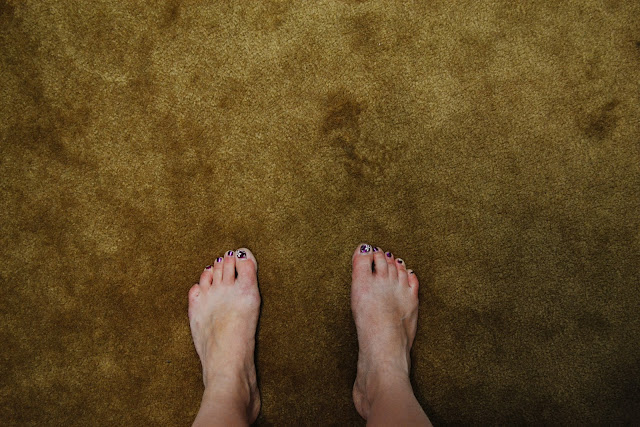 After two days, some quality time listening to j-mraz, and filling numerous bags with stuff to sell, donate and throw away...my room is actually CLEAN! It's a wonderful feeling.

Highlights include:
-Finding old journals and photos
-Finding my Chick-Fil-A calendar (filled with free food coupons!)
-Going through old notes from school friends (questionable abbreviations may have been used...as well as "z" at the end of words...)
-Throwing useless crap away...very liberating

My new best friends are storage tubs, both big and small. Love them. 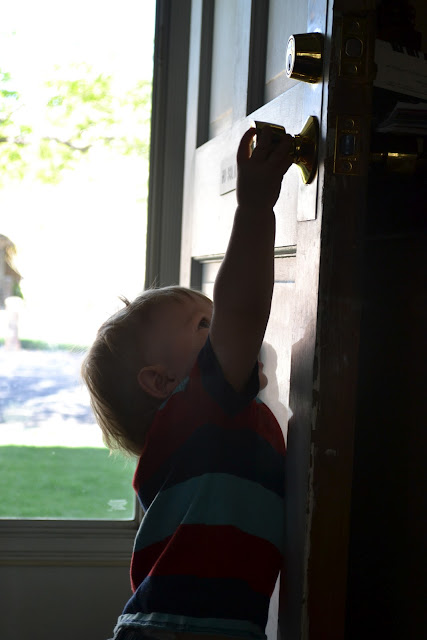 And I also got to snap a pic of my adorable nephew. Who will probably be walking in no time :)

Hope you all are enjoying your Wednesday!
Posted by Katie at 6:14 PM No comments: 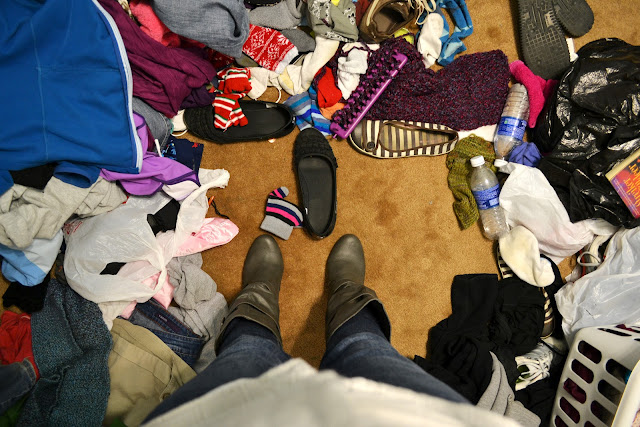 This picture of my room might as well be a page from a "Where's Waldo?" book. See if you can find a gray bandanna, a camera strap, and a tennis shoe! But seriously, this is a problem. Which is why, since I don't work until 4 today, I will be tackling this. I've been sort of working on it off and on...but once it's done, I know I will feel a lot better. If you don't hear from me for a few days...you might want to send someone in. Wish me luck!
Posted by Katie at 9:53 AM 2 comments: 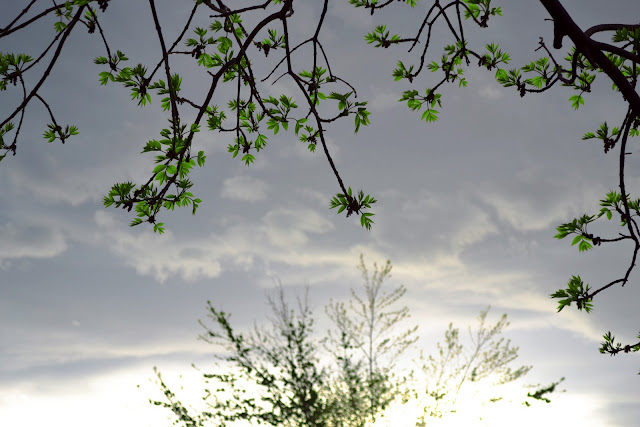 Two of my happy triggers: leaves blooming, and dinner rolls from Costco. I will address each of these in order. First, I just love watching everything come to life again. I always feel more alive in spring and the beginning of summer. Late summer I kind of feel lethargic and sick of heat, and then I come alive again in fall. The seasons of transition, spring and fall, are my favorite...and I know I'm probably not alone in that.

Now, the rolls. When I was younger, my parents would buy the big bag of 30 or so dinner rolls from the Costco bakery. Anyone? Anyone? These became like crack to my friends and I...tear them in half, spread on some butter, microwave ten seconds, and we were in heaven. Then repeat. Now over time, the memory of these rolls drifted away...until today. I went into Costco with my mom and sister for the first time in 8 or so years. I probably shouldn't have been as excited as I was, but it was quite the trip down memory lane. We meandered past all of the samples (taking each one of course) and we were talking about what my parents used to buy at Costco for us kids when we were younger. As soon as I remembered "DINNER ROLLS!", I had to go take a look and grab a bag. Although they aren't quite the same, I can still say they are delicious when buttered and microwaved (what isn't, really?). And they make me happy. 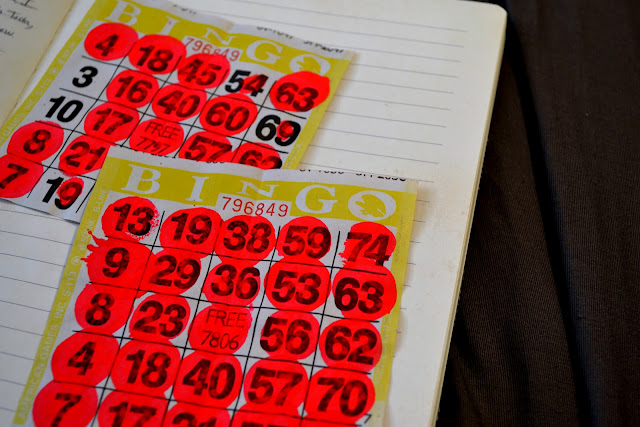 An exciting thing that happened this week: I won bingo twice in a row! Every Wednesday, Fridays does a bingo night at the bar. Yes, this is what my life in Thornton consists of. Haha. But it's actually a lot of fun with the group we have going! And, being that I hardly ever win things, and that I'm a dork, I had to document the winning cards. I won the "X" bingo and the blackout, which was pretty sweet. Prizes were a free appetizer, $5 gift card and $25 cash. Score. It was a good night.

Overall, it's the little things. :)

Life is weird a lot. I haven't been on in a week, and I haven't posted in longer than that. Sometimes, I just have nothing to say. And that's alright. I don't miss Facebook yet, and that's been great.

Living back at home, it's been hard to remember that there is anything outside of my daily routine of work and home. That there is anything outside of this small suburban radius of Thornton. So occasionally I'll be snapped out of my reverie by friends in other places, and I'll think to myself "I should probably keep in contact with them better", and it doesn't happen. I get sucked back into this strange loop of my life, asking the same questions and usually not listening to the answers.

Though, I will say that despite that, I am growing. I am learning, I am trying not to analyze for once, and I am growing. It's not always an up-and-up process, but more like an up-and-down process. I can be ok with that. And I am learning to be ok being alone...or more specifically, seeking God when I am alone. And it makes all the difference.

As far as the photo challenge, I guess right now I'd rather take pictures of what I want, when I want. Haha. These are pictures from my trip to Fort Collins to see my good friend Katie... 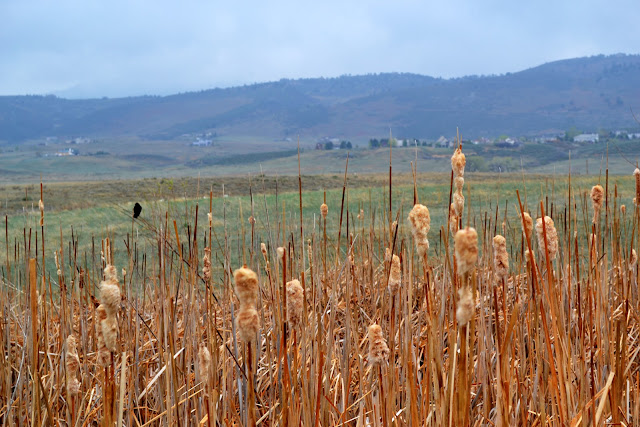 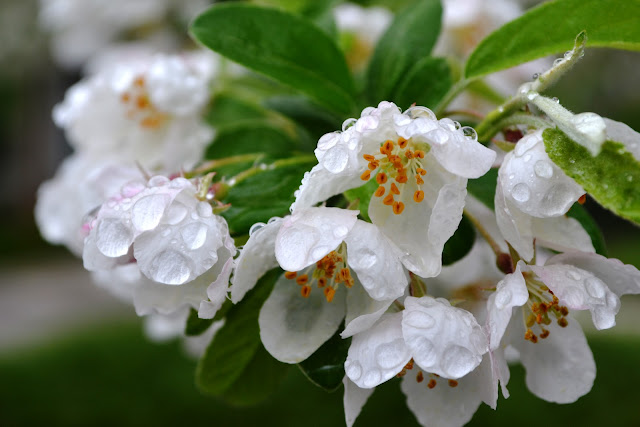 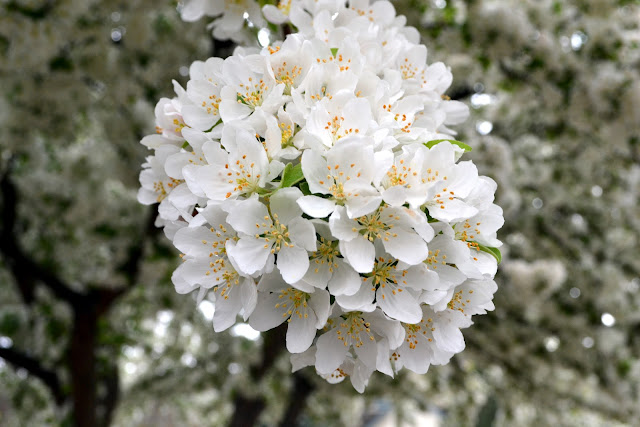 Saw these three bands on Saturday: Good Old War, The Belle Brigade, and Family of the Year. All great. I've been jamming out to The Belle Brigade in my car recently, and I love these songs:


"Where Not To Look For Freedom"

As far as the photo challenge...it will resume soon :) 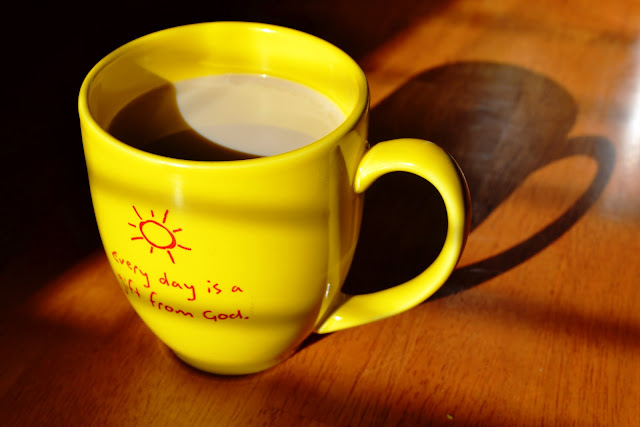 Alright. I realize that the color yellow was technically supposed to end on Tuesday, but it is ending today with this picture. And I am having a hard time choosing a color to move on to! Green and orange were suggested to me, but I'm leaning towards pink. I'm working all day tomorrow so unless I get up in the morning to do this, my picture might not be until after Easter. We'll see.

Anyways, I love this mug. It's bright and cheerful and usually has one of my favorite beverages inside of it. It's also the perfect size for holding while I'm tucked into one of our outdoor chairs on the back patio, enjoying the morning. Life is good with this mug.

I still don't know if I can put into words all that I've been taking in this past week. Maybe it's not meant to be put into words and shared on a public blog. Though I will say that not being on facebook has been wonderful. No one knows where I'm going, who I'm hanging out with, or where I'm at in life...and I don't know where everyone else is. And I don't care that I don't know! Although there is something great about being tagged in pictures and statuses and letting people know that your life is progressing, I was becoming too attached to that. I've been learning boundaries...we'll leave it at that. Changes are on the horizon...

Just a little something...

I have a book called "Bittersweet" by Shauna Niequist. And it's a bunch of short essays on life by this author compiled into one awesome book. This one, "twenty-five", is by far my favorite. I got this from http://www.iamaxis.org/twenty-five/. I hope you can take something away from it :)

Gone from facebook again. Taking a breather from the world of distraction and comparison. How does my life compare to other people's lives? Do they have a job? Are they married? Do they have a social life? Talents? All of this is advertised on facebook, and although it can be entertaining and convenient and informative, it can also be toxic. It is also very self-centered for me. How many people care about my life? How many of them can I get to care about my life? We fine-tune our profiles to put our best face forward. Our statuses range from play-by-plays on our most mediocre of life activities ("just ate a delicious sandwich") to glimpses of our deepest feelings ("don't know how much longer I can do this"). The amount of 'likes' or comments determine the success of the status, and therefore implies the importance of your life and your feelings. Sometimes I spend way too much time thinking about what status I should use. I've learned not to use facebook status-writing as therapy.

I have to do these breaks to gain perspective. I'm probably going back to facebook eventually, because there is value in keeping in touch with people I don't stay in contact with otherwise, but it won't consume my thoughts and my time.

I'm also learning about my place in this life. But more to come on that another time.