She heaved a heavy sigh as the bubbles from the bath curled around her back. She would often sigh like that without even realizing it, as if everything happening in life was built into that sound and that was her only way of releasing the pressure. If anyone was within ear shot, she would usually get a "hey, you ok?" or "yeah, ditto". The heavy, relatable sigh.

It had been an anxiety-filled day. Each hour that she worked was an hour that she wasn't getting paid for, because she had passed her contracted allocation for the week. But things still had to get done. "I'll just take it off of next week, or month," she told herself. But the tightness had already made a home within her chest, and it was not budging. As the clock hit five, she knew she had to force a stop. She closed her laptop, unfolded herself from her position on the couch, and stood up to stretch her unforgiving limbs. She had to do something to ease this tightness.

"Maybe I'll take a bath and journal," she said aloud. In living alone for 6 years she had become used to talking to herself and no one. Oddly enough, this presumed insane behavior actually kept her sane. She wandered into her bedroom and picked up her beautiful floral journal that she had recently gotten at Target. She loves journaling, and picking a new one out for herself after finishing a previous journal is one of her favorite things. It was a big deal; she was going to have this journal for at least a year, maybe more. And all it took was standing in the journal section and waiting for the right one to jump out at her.

Journal in hand, she made her way to the bathroom and turned the water on. Next to the tub was an essential oil labeled "Balance". She unscrewed the cap and smelled it, silently willing the scent to settle her soul. She poured some drops into the tub along with some bubble bath and hoped for the best. She checked her phone: no texts. She had been waiting for a certain name to show up on her screen, but it had apparently been a busy day at work. She set her phone back down on the top of the toilet and stepped gingerly into the tub. As she sank slowly down, she let the shock of the hot water occupy her thoughts for a blessed few minutes. The tightness loosened slightly. She turned to her open journal on the side and began to write.

She stopped after a few minutes, distracted by a buzz from her phone. Her heart jumped, hoping to see his name. She tapped the screen and her heart sank. It was not him. Her anxiety fueled her thoughts: was she texting too often? Did he need a break from talking to her? Was he sick of dating her? Then she took a deep breath and sat back, thinking of all of the reasons why those thoughts are not true. She thought about all of the times that she had anxiously waited for names of certain guys to appear on her phone screen, thinking that she had done wrong or was too much or not enough. And all of a sudden she got incredibly tired. The exhaustion ran bone-deep, revealing the brittleness of these thought patterns and actions that had made up her dating life for so long. She scribbled furiously in her journal, riding the wave of these memories that no longer served her and getting the poisonous thoughts out of her head. When momentum slowed, there was only one word left: enough. Both a command and a statement. She had had enough. She was enough. It was time to create new thought patterns that were rooted in worthiness.

The tightness began to unravel into the water, and she smiled to herself as she breathed in the faint scent of balance.
Posted by Katie at 1:25 PM No comments:

My friend is doing writing workshops. One was this morning, and one is this upcoming Thursday night at 6:30pm. It was wonderful and you should all sign up! It is welcoming and accessible; it's for anyone looking to express themselves through words whether you write regularly or not. Below is what I put together from this morning. I was honestly blown away by what everyone was able to come up with so quickly just by revisiting the basic concept of joining nouns and verbs. One of my favorite phrases someone had was "tea breathes". I feel so grateful that they shared their creativity with me. 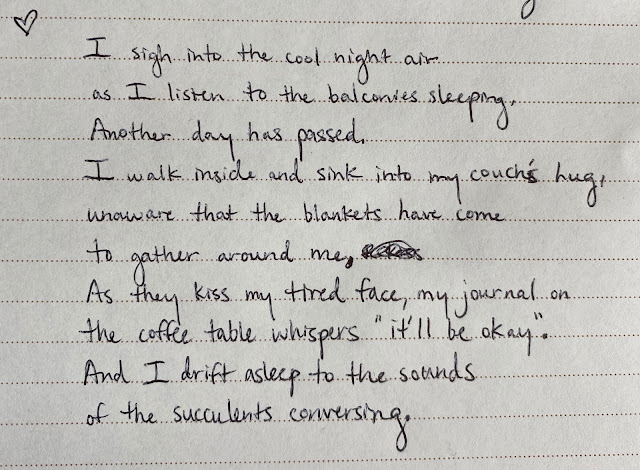 It was a lovely reminder to look for the moments of ease during this time of great stress.

Hope all is well, friends.
Posted by Katie at 5:31 PM No comments: